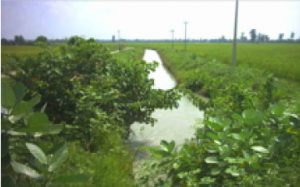 The Mahakali River in the east and the Jogbudha River in the west and south form the boundaries of the command area. Typically, the command area is north-south treading – about 16 km long and 2.4 km wide. The net command area is 3,510 ha excluding about 470 ha between Jogbudha and Indo-Nepal border outside the reach of Dodhara-Chandani Main Canal (DCMC). Long siphons are required; making the irrigation development for 450 ha areas uneconomical.